Halie Loren is an international award-winning jazz singer, songwriter and producer. Originally hailing from Alaska, Loren has been happy to call Eugene “home” for 15 years. When she isn’t touring, she directs her energies toward composing and recording. She has a career total of nine jazz albums to her name, in addition to three original pop-folk recordings with her newest musical project halie and the moon, and is a member of Eugene’s beloved “soul-grass” band The Sugar Beets.

Her debut jazz CD, 2008’s “They Oughta Write a Song,” was awarded “best vocal jazz album of the year” by the largest international independent music awards in 2009, and she was subsequently signed in Asia by JVC/Victor Entertainment and Justin-Time records in North America. She has received international acclaim as both a singer and a songwriter.  Loren’s original song “Thirsty” won an Independent Music Awards in 2011.  Her 2012 release, “Heart First,” was honored by Japan’s Jazz Critique Magazine as the best vocal jazz album of year, and reached No. 1 on the iTunes Canada jazz albums chart. In 2013, “Simply Love” debuted at No. 1 on Billboard Jazz / Japan and entered the iTunes Canada jazz chart at #1.  Both of her most recent albums, “The Best Collection” (Japan Only) and “Butterfly Blue”, followed suit in debuting atop the Billboard Japan jazz albums chart.

Loren’s live concert highlights include performances with symphonies (including the Jazz Orchestra of Sicily and the prestigious Britt Symphony), World renowned jazz clubs, and international jazz festivals. For the past seven years her tours have taken her east to west in the US and other parts of the world, including sold out tours in Canada, Japan, Italy, China, Hong Kong, South Korea, and Haiti. 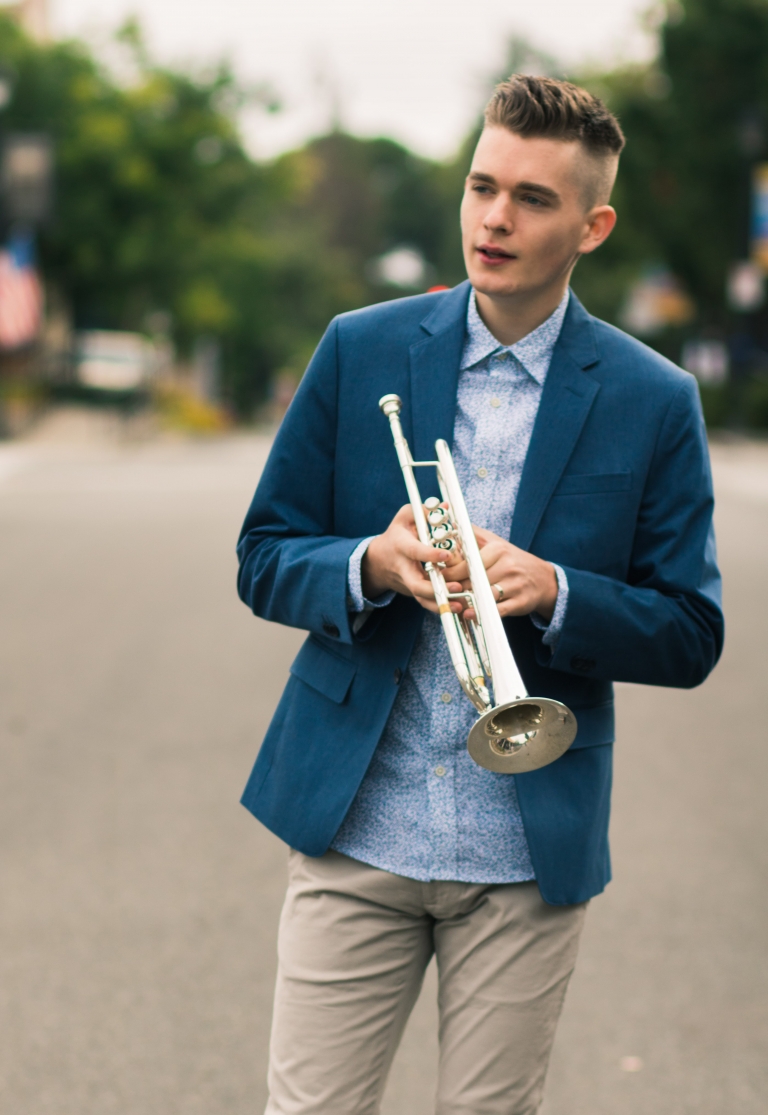 Hailed as “a great writer and a terrific trumpet player” by legendary songwriter Burt Bacharach, and said by jazz trumpet player Dave Douglas to be “one of the finest young trumpeters”, Tony Glausi is establishing his voice in the music industry as an award-winning trumpeter, keyboardist, composer, arranger, and producer with a distinct story to tell.

Tony also leads his own jazz quintet and nine-piece funk band, both of which play entirely original music. As a composer, Tony takes inspiration from his earliest musical influences while also channeling current trends in the music industry. He has written works for small and large jazz ensembles, nine-piece funk band, various chamber ensembles, pop and hip-hop groups, and several short films and TV web series. His pieces have been commissioned for ensembles throughout Oregon and featured in numerous concerts and festivals.

Tony composes for and performs and records with University of Oregon ensembles including the prestigious Oregon Jazz Ensemble, the JazzArts Oregon Combo, the UO Trumpet Ensemble, and the university’s premier brass quintet. He is also actively involved with other Oregon-based groups including Red Pants Trio, OrchestraNEXT, Beta Collide, and the Eugene Composer’s Big Band.

A passionate and devoted music educator as well, Tony works for the University of Oregon, the John G. Shedd Institute for the Arts, and in communities both local and abroad. He is the founding director of the Shedd Youth Jazz Orchestra, teaches a variety of university classes, maintains a private lesson studio, and consistently engages with middle schools, high schools, colleges, and summer camps throughout the United States.

Tim McLaughlin has been a 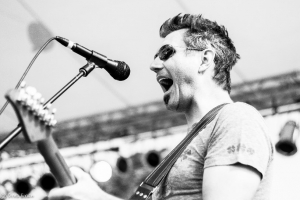 staple of the Pacific NW music scene since graduating from the U of O School of Music in 2002. He is equally versed on guitar and trumpet and can be seen touring and performing in groups ranging from salsa and funk bands, to rock and jam bands, to jazz ensembles, and with singer/songwriters.  McLaughlin is active in recording, teaching, performing and composing and brings to the plate his original versatility with an emphasis on creativity and spontaneity.

McLaughlin has appeared on numerous recordings, as well as toured the U.S. multiple times.  McLaughlin is the bandleader of the award-winning jazz/funk/world-fusion band, Eleven Eyes.  He also performs with other notable artists and ensembles such as the March Forth, The Essentials, Medium Troy, Amy Clawson, NOW! Trio, Son Melao, Hello Dollface, Everyone Orchestra, Emily Jensen, Halie Loren, Reeble Jar, Son Melao, John Shipe, and as a solo artist.

As a music educator, McLaughlin hosts a full private teaching studio and directs the Oak Hill School and Marcola Schools music programs.  McLaughlin has been a strong advocate for supporting youth in music by developing and directing the Music’s Edge Rock Camp at the WOW Hall and working with the Lane Arts Council.  McLaughlin has also composed, produced, and recorded the soundtracks to multiple documentaries with award-winning documentary producer, Jerry Joffe. 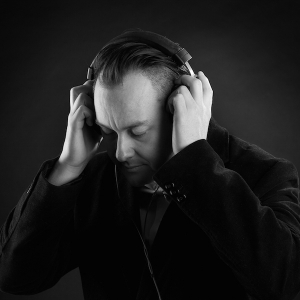 At 18 years old, he decided he wanted to make something beautiful that stirred creativity in his life and in the lives of others. After a serious bout of soul searching abroad, and a ride with an Australian rock guitarist while hitch hiking in New Zealand, he had his sights set on finding a studio apprenticeship upon his return to the states.

In 1996, Thaddeus enrolled himself in every sound-related course available at LCC. The courses were helpful and insightful, but he remained hungry for much more that what is available in school. Suddenly, a friend proposed an ambitious idea to start a studio space that could allow for rehearsals and recording. After searching for the perfect location, they found a warehouse in west Eugene. It was full of mold, dry rot, and crumbling insulation due to many years of bean/alfalfa sprout production. To make this become a reality, they needed to find at least two other people (hopefully older and with some experience) who were interested in transforming it into a recording studio. As luck would have it… they did. Sprout City Studios was born on Sept. 27th, 1997.

Knowing next to nothing about power tools to begin with, handling the majority of the deconstruction, cleaning, and remodeling left Thaddeus with many carpentry skills, but unfortunately without his two newest partners. Scared, overextended, and under qualified, the two youngest partners were left alone to finish the planning and construction of an acoustically accurate and sound proofed studio space. At that time, both had to work 2+ jobs while trying to snare a market for their new business in a small city. Two years into the project it was still incomplete, though functional. The stress proved to be too much and the original partner sold his interests to a new face, who soon after (due to family illness) moved to the midwest.

Now the sole proprietor of Sprout City Studios, Thaddeus was a reluctant 20 year-old business owner. With no will to quit this far in, he decided to push on through. Working live sound and as many odd jobs as there are days of the week, and also with the help of some amazing friends and family, over the next few years the studio construction was completed and continued to gain more and more clients, artists, and friends.

The experience gained by the hands-on work of the previous few years proved invaluable – there was nothing better he could have learned in any school. The studio was his school and through luck, experience, and the kindness of knowledgeable people, Thaddeus found that he was now an accomplished and experienced sound engineer.

Nearly twenty years later, he has become a staple in the Eugene music scene, having worked with stars such as Frank Black of The Pixies and Thomas Mapfumo, and has been in several local and national publications. He also acts as a consultant and beta tester for several businesses in the recording industry, such as iZotope.

Currently Thaddeus is building a mastering studio for his newest passion – MASTERING.

Vicki Krohn Amorose is an 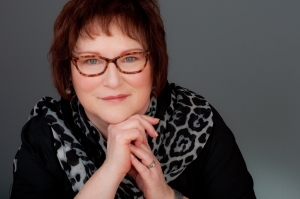 artist, writer, and arts advocate. Her background as an educational media writer, performance and voiceover artist, advertising copywriter, art instructor, museum docent and gallery manager prepared her to synthesize the ART-WRITE viewpoint for her book “ART-WRITE: The Writing Guide for Visual Artists”​ ​(artwritebook.com), which is used internationally by art schools and independent artists. She is an alumna of the University of Michigan and the Academy of Art University San Francisco. Vicki has lectured on topics in contemporary art at University of Oregon, Lane Community College, and Oregon State University and she writes for Professional Artist Magazine.