The Dr. Edwin Coleman Jr. Center Mural Project is a project of the FAN Equity Action Team, which formed in the fall of 2017 due to concerns about the increasing number of hate crimes and graffiti incidents in the area. The Equity Action Team’s goal is to help the Friendly neighborhood be more welcoming to all.

In January and June, 2019, FAN Equity Action Team received City of Eugene Neighborhood Matching Grants funds to double donations needed to fund the creation of three murals and an informational signboard to honor the life and legacy of Dr. Coleman, for whom the community center was renamed by the Eugene City Council in April, 2018.  Support for the Coleman Center Mural Project came from many organizations, businesses and individuals in the community. 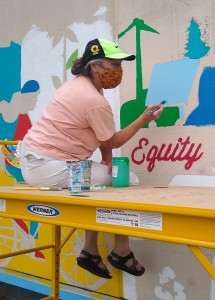 All murals painted in this project have been completed by muralists who also serve on the Lane Arts Council teaching artist roster. While the first two murals were painted as independent contracts with the FAN Equity Action Team, the final mural brought Lane Arts Council in as an official partner.

The first mural on the south wall was completed in May, 2019. Designed by muralist Jessilyn Brinkerhoff, it shows Dr. Coleman during his 50 years in Eugene as an educator, musician, civil rights activist, writer, and community and UO campus organizer.

The second mural on the west wall, right, was completed in October, 2019. Designed by muralist Esteban Camacho Steffensen, it illustrates two of Dr. Coleman’s passions throughout his life:  Social Justice and Music.  It features Dr. Coleman in a “magical” jazz band of iconic musicians with whom he performed, and visionary civil rights leaders, some of whom he met.  The figures in the mural are Edwin and Charmaine Coleman; Dr. Martin Luther King, Jr.; Maya Angelou; Cal Tjader; Miles Davis; James Baldwin; Peter, Paul and Mary; and Mahatma Gandhi.

The theme of the third mural on the west wall, left, is “Building a Better,
More Just and Equitable World.” 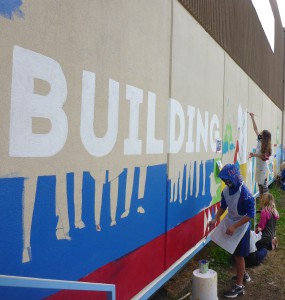 The designs on this mural were created by middle school students at Boys & Girls Club, which is housed in the Center. The students were asked to bring the ideas they had learned about the life and legacy of Dr. Coleman into the present and future, and to envision a better, more just and equitable world. The students worked with Lane Arts Council muralist Jessilyn Brinkerhoff to create the designs, which she arranged in a beautiful mural. The students then spent several days painting the mural, with the assistance of 30 community volunteers.

The final piece of the Mural Project, the informational signboard, will be installed in October, 2020. A Mural Project Celebration is planned for the future.